Finding the story in the data

When you perform multiple forms of research on a project, you gathered a significant amount of data on your competition. Unfortunately, this data won’t be worth much to your team unless you take the time to refine it into something actionable.

“The single necessary and sufficient condition for a business is a paying customer,” author Bill Aulet accurately stated in his book Disciplined Entrepreneurship. Business and product share the same base concerns, finding customers, and converting them into fans of our work. We don’t know how to do that yet but you now a trove of data that can point you in a direction.

When you began this process, you knew a little about the competitor, but it was likely observations that an untrained eye could make. Now you should understand how they position their product, and who their target customer is. Bonus points if you tested your competitor's product with users. Taking that leap powers you with data about how potential customers feel about those products.

That’s a lot of unstructured information to just dump into the lap of your team, which is why your analysis of this information is so critical. You’ll come into contact with people who don’t understand the value of design, but this is one of the key moments when you can produce something for them that pinpoints how your efforts can elevate the collective efforts of the organization.

The artifacts we produce are not in themselves the value of design, but they create an opportunity to communicate in a manner that will resonate with the non-designers in the room. Use these moments to connect and educate as they are crucial to the success of your project.

In constructing a report that can be distributed to your team, there are a few key elements that must be present before you begin your discussions with a broader group.

Articulating these items in a way that your organization can quickly understand allows everyone a chance to determine if this concept has merit or if a different path forward should be attempted.

By this point, you’ve gained two valuable sets of data: the spreadsheet you constructed for each organization during your initial round of research and the observation notes you made while testing competitor products.

In compiling an overview, you’re distilling details into general observation that apply broadly to the set of competitors you’ve been studying. On the first pass, common themes should emerge. These include but are not limited to:

After you have identified how your competitors are alike, it’s time to note the significant outliers you’ve discovered along the way. The outliers are particularly important because they often indicate whether their alternative path forward than the pack is advantageous.

Perhaps one service is much different from the others — how successful is that service? Is it doing well or struggling? Uncovering why they have chosen that direction can often be discovered by studying the structure of the organization — information you should have already gathered.

The overview you produce could ultimately lead the analysis document you construct or a page in a more robust presentation, but it should not just be a chart of the data you collected. Remember, you’re main goal is to make sense of the data and guide your team through the work you’ve performed.

Most competitive analysis documentation you’ll encounter includes some form of SWOT Analysis (Strengths, Weaknesses, Opportunities, Threats). Generally credited to Albert S. Humphrey, the four quadrants shown below provide the structure needed to distill the data you collected into a form that highlights how an organization measures up against the competition. 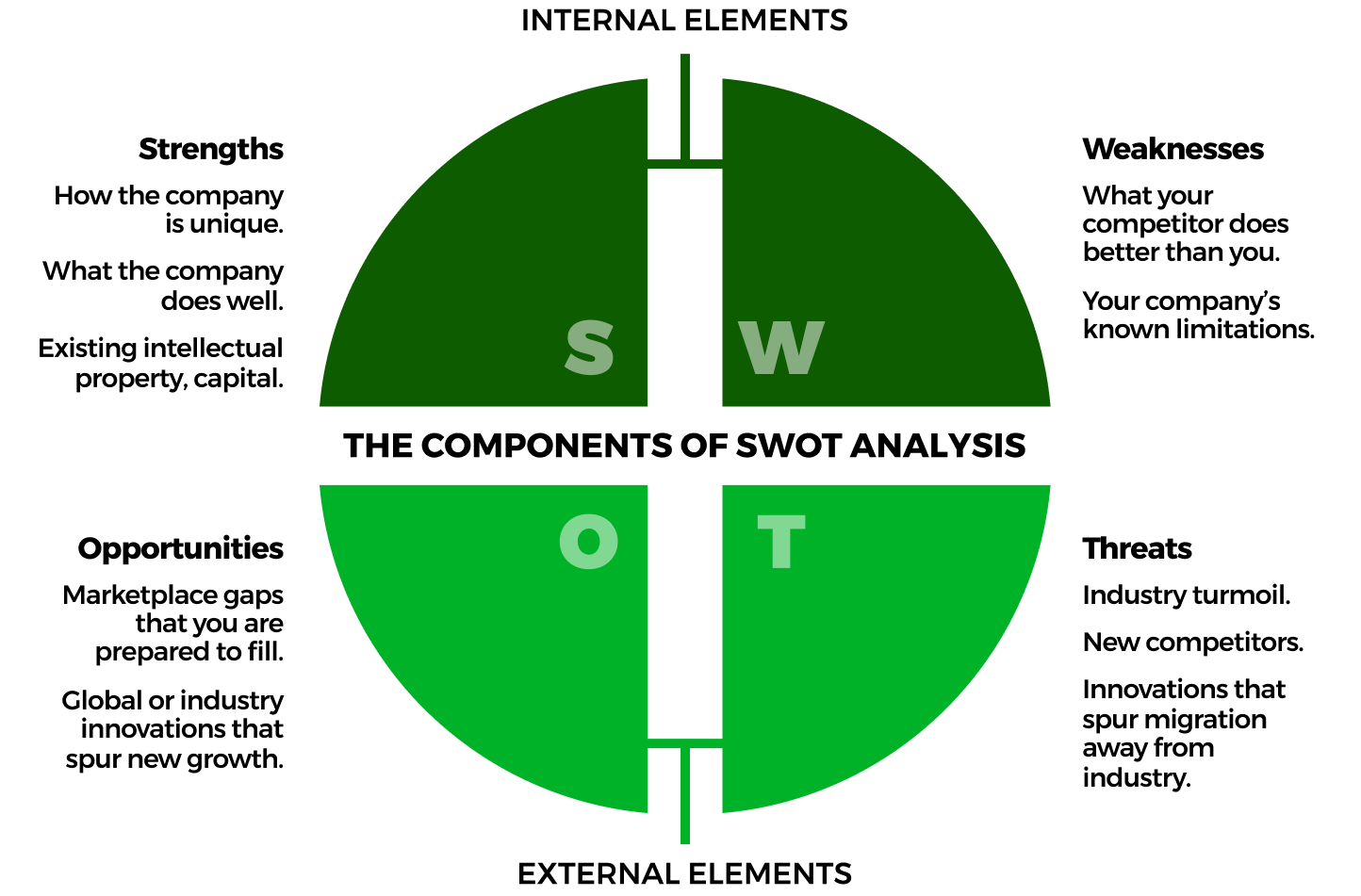 As you can see in the chart, there are internal and external components to the grid. Strengths and Weaknesses are powered by internal knowledge you have about a company. When constructing a grid for your company or client, the work you’ve done to study the organization pays off in this step. The external components, Opportunities and Threats, are composed of the observations you made while studying the competition and the industry news associated with a given company or product.

Your main goal is to highlight where your organization has a chance to win and where the weaknesses reside. If there are significant concerns, this is a great time to raise them.

No reasonable amount of time or money will uncover everything about your competition, but you should be able to extract enough information to move forward.

Still, there will be holes in the work you’ve produced. These ‘known unknowns’ are items that we have identified as areas where more research is needed, but we’ve not conducted the work required.

Here we begin to enter yet another area of scientific inquiry, where there are four types of information potentially available to us. 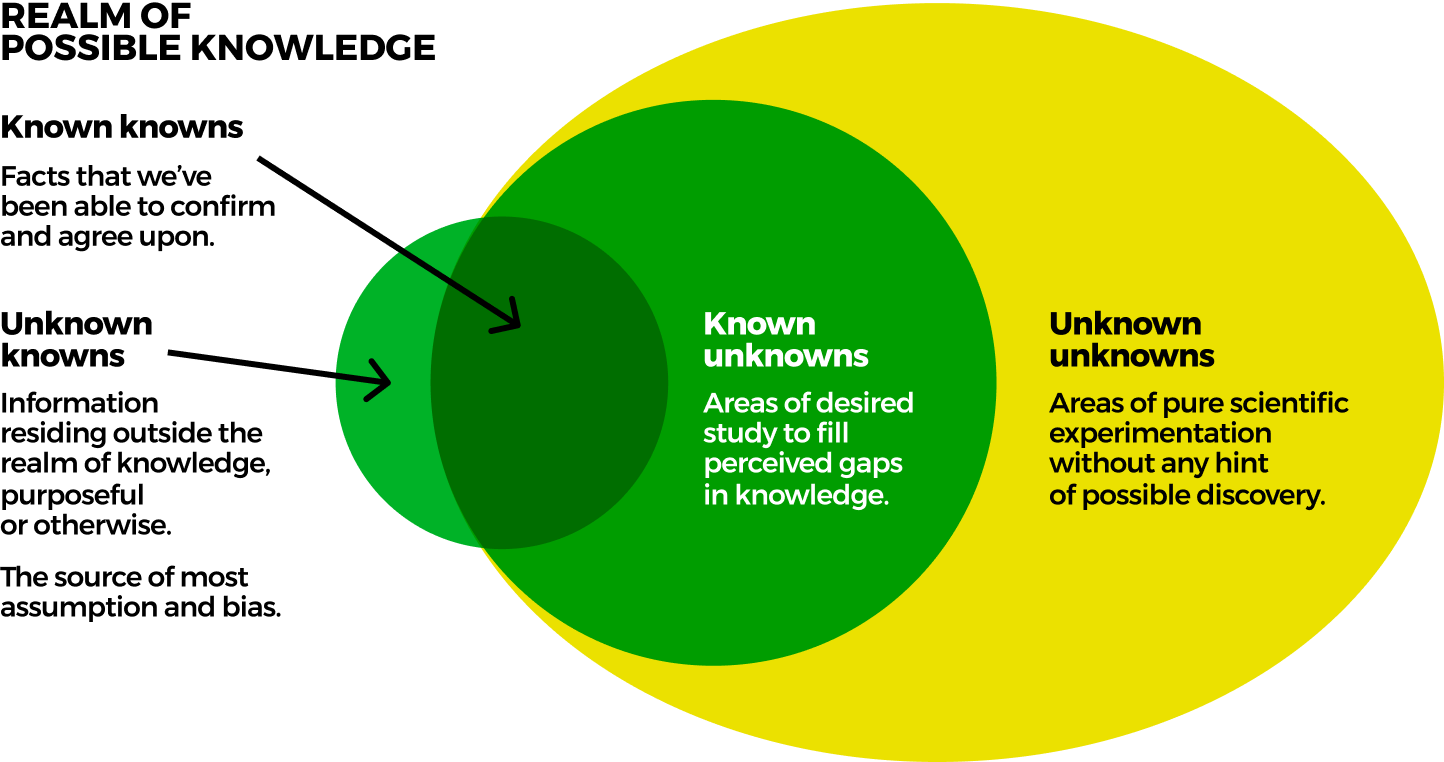 If this concept sounds familiar, it’s because it took on a rather infamous association in 2002 when former US Secretary of Defense Donald Rumsfeld used the framework in a briefing regarding the Iraq War.

This was written off as political nonsense, but it actually has merit as the chart above clearly displays that there will always be a realm of information that we’re simply unaware of.

Curiously, Rumsfeld only spoke of three of the conditions. The unmentioned fourth was the unknown knowns, which is the presence of knowledge that is known amongst the collective but not yet surfaced or shared. This is also the realm of misinformation, hunches, and instinct. A place where things we have heard reside in the shadows, known but purposefully unconfirmed.

It’s best to deal with this type of information directly. Yes, that nugget of data still is on the radar, but it lacks the supporting evidence needed to merit consideration. Tread carefully here as you could stumble into the realm of confirmation bias quickly and begin explicitly looking for information to support these hunches.

This chapter was focused on the distillation of information gathered through your competitor research and testing. The goal here is straighforward — take your collection of data and mold it into a consumable form that could be presented to your team or stakeholders.

The major components that should be present include:

Up next User Interviews